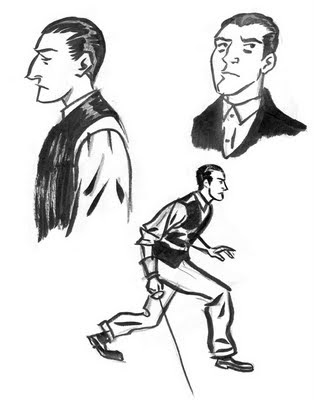 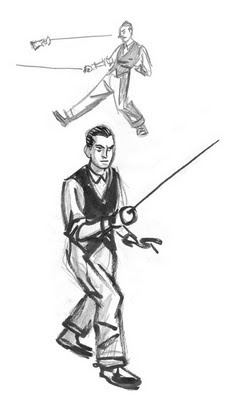 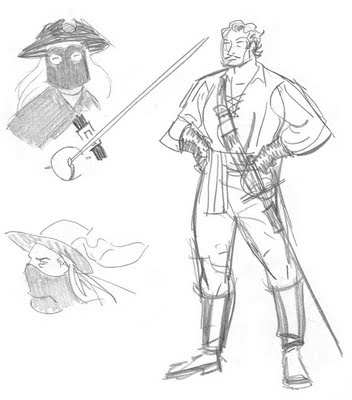 I’ve kinda had my fill of superhero drawings for a little while, so I thought I’d get back to work on my fencing/noir story. Generally speaking, most comic book publishers ask to see about five sequential pages when you pitch a book to them, but I’m planning on sending at least twenty (the prologue and first chapter) so that the editors who read my submission will want to find out what happens next. At least, that’s the idea. I’ve finished about a dozen pages already and am hoping to finish the art and two-tone colors/greyscale (I haven’t decided yet which would serve the story best) on the first twenty pages by mid-september. But in the meantime, here are some character drawings taken from my sketchbook.
Posted by Dan C at 10:12 PM 3 comments:

Z is for Zatanna

I have only read one comic book starring Zatanna my entire life, a Justice League of America comic where she was sent to capture a brainwashed Wonder Woman (she lost). Zatanna is a lot of fun to draw, though, so I thought I’d end this little "Superhero Alphabet" theme with her.

I’m going to take a little break but will back soon with some new pages from my upcoming projects. Thanks for stopping by.
Posted by Dan C at 2:17 PM 5 comments:

Y is for Yellowjacket

Am I a huge Yellowjacket fan ? Eh, not really. But there aren’t a lot of superheroes whose names begin with "Y", so he was pretty much my first pick. I remember this great story in Avengers #217 where Yellowjacket, who had been kicked off the team and was down on his luck, was tricked by a super-villain into fighting his former teammates in order to save a young girl. Written by Jim Shooter with art by Bob Hall, it was a really good comic. Also, points go to Yellowjacket for being the superhero formerly known as Giant-Man, another favorite of mine. There ya go.
Posted by Dan C at 5:54 PM No comments:

X is for X-Men

Uncanny X-Men #36 was one of the best Christmas presents I ever received. I was eleven and I must have read the comic at least twenty times that day. Created by Jack Kirby and Stan Lee, the original X-Men (Beast, Angel, Cyclops, Marvel Girl and Iceman) quickly became my favorite super-hero team of all time.
Posted by Dan C at 6:53 PM No comments:

W is for Wildcat

A couple of years ago my pal Jon Morris gave me a copy of DC Comics Rarities Archives vol.1, and in it there was a cool Wildcat story—one of the only ones I’ve ever read, to tell you the truth—entitled Wildcat meets the Kidder, drawn by Joe Gallagher. I thought the story and character were so cool that I decided to add him to the list. Wildcat is a former boxer-turned masked adventurer, so I thought I’d draw the modern, bandaged-fist version of the character.
Posted by Dan C at 6:20 PM No comments:

V is for Vortex

The Elementals, written and drawn by Bill Willingham (long before he began working on Coventry and Fables), told the story of four people who died under unexplained circumstances and who were brought back possessing powers of the four elements (Fire, Earth, Air and Water) to fight an evil sorceror by the name of Saker. With a name like Vortex, I’m pretty sure you can guess which element he controlled. In any event, he was one of my favorite characters in the book. The Elementals, who had its origins in the role-playing game Villains and Vigilantes (in the modules Death Duel with the Destroyers and The Island of Dr. Apocalype, both of which were also written and drawn by Mr. Willingham) was a well-written, well-drawn comic book series with interesting characters and exciting storylines. Another book I miss terribly.
Posted by Dan C at 7:07 PM No comments:

U is for Umbra Sprite

Some of you out there may not know who this guy is… his name is the Umbra Sprite and he was the mysterious enchanter and arch-enemy of Kevin Matchstick (see "K") from the great Mage comic book. The Umbra Sprite, whose face was always seen in shadow (sort of like The Octopus, see "O"), was the owner of the Styx Casino and father of the five hideous Grackleflint brothers, Emil, Lazlo, Stanis, Piet and Radu. He also had a growing dependancy on the leaves of a magical plant that he would smoke in order to "focus his powers". By far the coolest pot-smoking, no-faced bad guy I’ve ever seen.
Posted by Dan C at 9:57 PM No comments:

T is for Tigra

Yes… Tigra. The only Avenger to ever get away with wearing a string bikini as a costume. And unsurprisingly, also the Avenger that all the other male Avengers wanted to "team up with" on missions. Kind of the superheroine equivalent of Scooby-Doo’s Daphne.
Posted by Dan C at 6:37 PM No comments: