Here is my latest (and last--at least for awhile) drawing on CORNERED, inspired by the cover of X-Men #36. I've said this before*, but I sure do dig the original X-Men (and issue #36 in particular). I could draw these guys all day.

In other news, I'm going to be closing my Etsy shop at the end of the month, so if you'd like a drawing and/or signed-with-a-sketch comic book from the shop, now is the time.

*In one of my Superhero Alphabet posts
Posted by Dan C at 5:27 PM 4 comments:

Yet another drawing on CORNERED, inspired by the cover of The Nocturnals #4.

This didn't turn out quite like I had hoped, which just goes to prove a theory I've had for a long time: nobody draws The Nocturnals as well as their creator, Dan Brereton. Go check out his website if you want to see some cool drawings of these guys.
Posted by Dan C at 8:19 PM No comments:

A new drawing on CORNERED, inspired by the cover of The Badger #68 (my favorite issue ever, drawn by the excellent George Freeman).

Mike Baron's Badger is my favorite martial-arts superhero of them all. Instead of endless soap-opera intrigues, soul-searching and whiny angst, Badger comics were all about beating up rednecks, demons, and evil karate masters, which to me was a refreshing change. Many great artists worked on the different incarnations of the character, like George Freeman, Jill Thompson, Steve Rude, Mike Oeming, Mitch O’Connell, and the Pander Brothers (just to name a few), and the genre-spanning stories ranged from Bruce Lee-style martial arts tournaments to cameos in Mike Baron’s Nexus comics, with the occasional H.P Lovecraft/Cthulhu parody thrown in for good measure (again, see issue #68). Just goes to show all the fun things one can do with a mentally-disturbed Vietnam vet with multiple personalities who masters “obscure, esoteric, arcane (not to mention abstruse) martial arts”.*

To my knowledge, the last Badger series came out in the late 90's, but the character always seems to come back, so maybe--just maybe--one of these days I'll get a chance to draw an issue. Hey, a guy can dream.

*Excerpt from The Badger’s character description from the inside cover of every issue.
Posted by Dan C at 5:39 PM No comments:

A new drawing on CORNERED, inspired by the cover of Alpha Flight #4.
Posted by Dan C at 5:35 PM 3 comments:

And a couple of sketches thrown in just for fun: 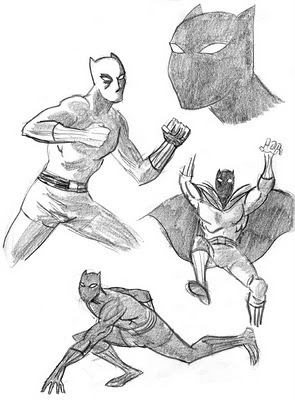 I dunno about you, but I really dig the old school Black Panther. I haven't read any BP comics in years, but I'm really looking forward to the new Marvel series, drawn by the talented Francesco Francavilla. From what I've seen online, the book is going to be amazing.
Posted by Dan C at 5:36 PM No comments: