Yeah, I know... it's been a long time since I've posted anything around here. But there’s a lot of cool stuff coming up soon, so I thought I’d take a minute to do a little (okay, a big) update:

The first chapter of Archer Coe, the Mind’s Arrow & the Thousand Natural Shocks, the book I created with writer Jamie S. Rich, is going to be released digitally on Comixology on Tuesday, April 8th, and the remaining thirteen chapters will be available for download twice a week (on Tuesdays and Thursdays) until May 22!

The softcover edition of Archer Coe  is scheduled for release on June 18, and Oni Press has prepared a handy little order form that you can print, fill out, and give to your local comic book shop. The deadline for pre-orders is coming up fast, (May 26, 2014) so if you're interested in the book, you might want to hurry :) ! 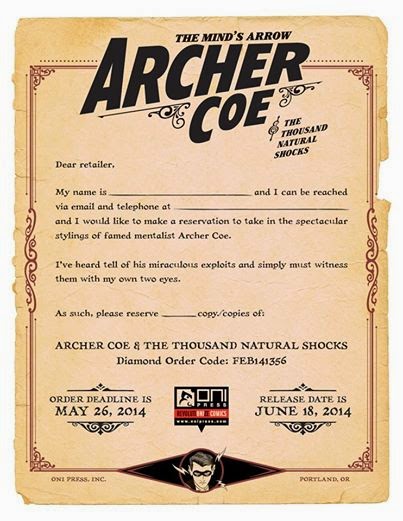 As you may have seen if you come around here much, a few months ago I contributed a Black Panther drawing to a charity auction event held by my friend Charlie Harris, the owner of Charlie’s Comic Books in Tucson, Arizona. He's hosting another event on May 3, 2014 for Free Comic Book Day, and this time around I drew the Ra’s al Ghul /Batman clan. Here are the black & white and colored versions :

If you’re interested in purchasing the original drawing (and if you’re in Tucson on May 3rd), feel free to get in touch with Charlie or stop by the store! The winning bidder also gets a free hi-res color copy of the drawing, and all proceeds from the auctions go to help out the Tucson chapter of the Salvation Army, who provides help and support to the needy.

The digital version of Paranormal vol.1 will also be released soon, and Evileye Books has already begun a really cool teaser/promo campaign on their Facebook and Twitter pages. Here are the first three images: 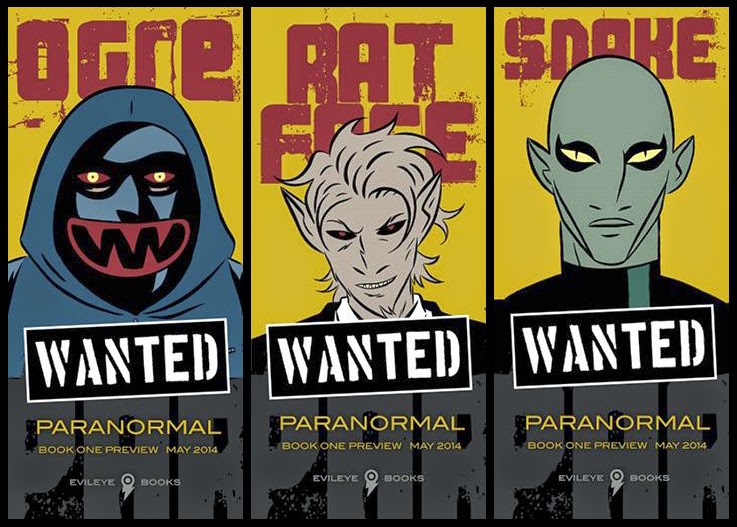 So go be friends with  Evileye Books (or follow them), because subscribers to Insider@EvileyeBooks.com can sign up to receive a 17-page digital preview of the book, which will be released in May! More info can be found on the publisher's FB/Twitter pages.

Right now I’m hard at work on my noir/fencing story, Riposte, and am making good progress. The book is scheduled for release (in France) in January 2015, and I’m doing my best to make that happen.

I may also have some good news soon in regards to an English version, too, so keep your fingers crossed and stay tuned!

The minute I finish Riposte, I’ll be getting started on Archer Coe, the Mind’s Arrow volume 2. I have a big red folder with the script inside it next to my drawing table, and every time I sit down to work, I swear I can hear it saying, "Draaaaaawwwww meeeeee!"  I dunno if I'm hearing things or not, but the sooner I get started, the better. It’s starting to get a little creepy around here.

And let’s not forget: RUN, my wordless spy story that appeared  in volume 5 of Aces Weekly last June is still available.

If you subscribe to volume 5, drop me an e-mail and let me know what name you used to create your subscription account. As soon as I get confirmation from Aces, I’ll be happy to send you an original drawing of one of the characters from RUN on an official Aces Weekly sketchcard, free of charge. I’ll even spring for postage.