F is for Fantastic Four

To me, Stan Lee and Jack Kirby’s Fantastic Four stories rank up there as some of the best adventure/superhero stories to ever see print. Stan and Jack created something amazing and unique, and with such a great cast of main characters and villains (including Dr Doom, Galactus, Mole Man and the Skrulls), it’s no wonder some folks call The Fantastic Four the “World’s Greatest Comic Magazine”…
Posted by Dan C at 9:37 AM No comments:

E is for Eagle

As any comic book readers out there probably already know, black and white comics were the big thing back in the early-to-mid 1980s. Following the unexpected success of The Teenage Mutant Ninja Turtles, the American comic book market was flooded overnight with black and white titles of varying quality. One of the better black and white books published at the time—and still one of my favorites today—was Eagle, by Neil Vokes and Rich Rankin.

The main character, mysterious supernatural investigator and martial artist Richard Eagle, crossed swords with deadly assassin cults and supernatural threats in a futuristic city. He was helped in his investigations by a mystical (and kinda evil) orb of almost unlimited power, which he controlled—barely—using his vast knowledge of magic. The stories were like nothing I’d ever seen before, and Neil Vokes sure knew how to draw a fight scene.

Plus, there were lots of ninjas.

The original comics are pretty tough to find these days, but if you’re interested, you can order the collected version right here.
Posted by Dan C at 10:38 AM 9 comments:

D is for Dr. Strange

I can’t say that I’m a hardcore Dr. Strange fan or anything, but I do remember thinking he was pretty cool when I first read his origin story at the local library. I was only about seven at the time, so I’m pretty sure I didn’t catch about 99% of the psychedelic stuff Steve Ditko and Stan Lee threw into that first issue, but that’s okay by me. It was a fun read anyway.

To tell you the truth, I really came to appreciate the character only after reading Brian K. Vaughan and Marcos Martin’s brilliant mini-series Dr. Strange: The Oath. I’m a huge fan of Marcos Martin’s artwork, and Brian Vaughan is an excellent storyteller, so even if you aren’t familiar with Dr. Stephen Strange, I highly recommend the book.
Posted by Dan C at 9:34 AM No comments:

C is for Captain America

When I was about five years old, I was at the local grocery store with my Mom and I begged her to buy me this comic book… it was, if I remember right, a copy of Captain America no. 193 drawn by Jack Kirby, and I thought it was the coolest thing in the world. Oddly enough, I didn’t read very many Captain America comics after that (with the exception of Mike Zeck's memorable work on the title back in the early 1980’s), but Cap will always hold a special place in my heart, because he was the hero of the first comic book I ever read.

The above illustration is a commission I did last fall, inspired by Jack Kirby and Jim Steranko’s unforgettable action scenes when Cap would wipe the floor with a room full of heavily-armed HYDRA agents without breaking a sweat.
Posted by Dan C at 11:01 AM No comments:

B is for Batman

I’ve been a Batman fan for as long as I can remember, even though I only started reading the actual comics when I was in junior high. My first exposure to the character came from the Super Friends cartoon, the Batman TV show and various books I’d get at the library.
Everyone seems to have their favorite version(s) of the character, and mine are without a doubt Matt Wagner’s (from the Faces graphic novel), David Mazzuchelli’s (Batman: Year One ) and Paul Pope’s (see Batman Black & White : Broken Nose or Batman: Year 100).
Posted by Dan C at 10:12 AM No comments:

A is for Abe Sapien

Here's a sketch of Abraham "Abe" Sapien, one of my favorite B.P.R.D characters.

B.P.R.D (Bureau for Paranormal Research and Defense), published by Dark Horse Comics, is one of my favorite comics these days. It tells the story of an elite federal agency whose mission is to protect the world from supernatural menaces. The book is co-written by Mike Mignola and John Arcudi, drawn by Guy Davis and colored by Dave Stewart, all of whom are top-notch creators, and who consistently deliver fantastic work month after month. Once I start reading a new issue of B.P.R.D., I usually can’t put it down until I finish it, and then I want to kick myself for not taking the time to read it s-l-o-w-l-y, because waiting for the next book to come out is torture (The Universal Machine, Killing Ground and The Warning are my favorite books in the series, but all of them are great).
Posted by Dan C at 9:49 AM No comments:

The other day I was drawing in my sketchbook and, as usual, I got sidetracked & started churning out sketches of comic book characters whose adventures I’ve enjoyed reading since I was a little kid. After awhile I started thinking, “I bet I could draw a favorite comic book character for each letter of the alphabet”, so I gave it a try. Some of the sketches actually turned out pretty well, so I thought I’d clean them up a bit, add some color and post them as an ongoing theme here on my blog over the next few weeks...

So starting tomorrow, and every other day after that, I’m going to do my best to post a sketch, in alphabetical order, of my all-time favorite comic-book characters.

As promised, here is my latest drawing for the Golden Age Shoot-Out.

This round’s challenge was to re-draw an existing Golden Age comic book cover, using a different character than the one depicted on the original cover.

Jon asked me to draw the cover of Captain Marvel Adventures #3:

And the different character I was to use was the Spy Smasher, sworn enemy of, well... spies. (He would smash them.) Anyway, here’s my take on the cover, along with a rough sketch:

If anyone wants to see a cartoon of Spy Smasher in action (taken from the Justice League Unlimited cartoon), here’s a video:

Jon will be posting his drawing soon, so gowan, do your eyes a favor and check out his blog!
Posted by Dan C at 11:28 AM No comments:

Over the past few years, talented writer-cartoonist Jon Morris and I have been involved in a friendly, occasional cartooning joust, where we challenge each other to drawing different comic book characters, panels and/or covers from the 1930’s -1950’s, the period commonly referred to by comics fans as “The Golden Age”.

I finished my drawing for Round 9 and will be posting it tomorrow, but before I do that I thought I’d post the earlier entries, for those of you who didn’t catch them the first time around on my old WordPress blog:

Round 5: A bust of Mr. Terrific

Round 6: Golden Age Green Lantern (pencils and color by me, inks by Jon) 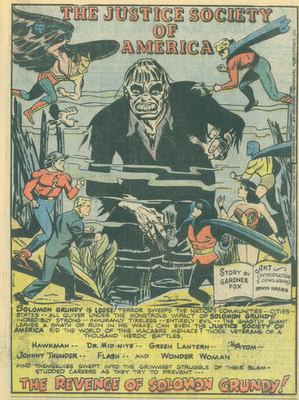 See you tomorrow!
Posted by Dan C at 5:38 PM No comments: