After spending several weeks on the fence, I finally decided to participate in this year's Inktober art challenge: 31 days, 31 ink drawings, posted on social media with the hashtags #inktober and #inktober2019.

For the past year or so (ever since I finished drawing Archer Coe and the Way to Dusty Death, in fact), and despite having tons of ideas for projects and stories, I've had a particularly difficult time getting back to drawing comics. I felt that maybe, just maybe, this year's Inktober might be what I needed to get me motivated to draw comics again.

I've never followed the official Inktober prompt list, and I wasn't in the mood to draw a different comic book character every day (as I had done in my previous Inktobers), so this year, I opted to tell a story. I'd been itching to draw a daily newspaper strip for a long time, and thought that this might be my chance to practice telling a story in that format.  I had a few false starts, but eventually came up with the idea of an action/adventure story starring Black Jack, one of the characters from my PARANORMAL comic book trilogy.

As I drew the comic, I tried not to think ahead about what was going to happen next, and just let the story unfold, from panel to panel, before my eyes. It was both a challenging and exciting experience.  Thanks to everyone who encouraged me and sent along good vibes and kind words, I managed to finish a drawing every day (even though I ended up posting one or two of them a couple of hours after the daily deadline, because sometimes, there just aren't enough hours in a day). 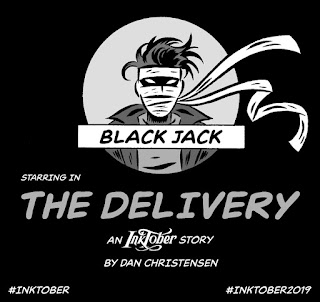 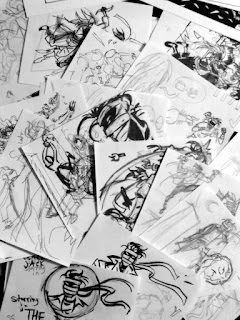 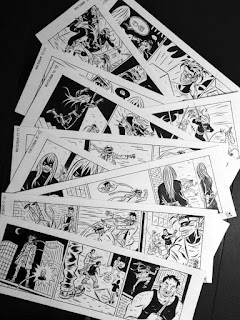 I was recently accepted to be a contributing cartoonist on the French webcomics site GrandPapier, and have posted the entire 31-page story over there if you want to go check it out, (instead of reading it by scrolling up and down my Instagram page).

I hope you enjoy reading The Delivery as much as I did drawing it! Here's hoping I'll have some more comic book news to report soon. Stay tuned :)