A few drawings and sketches from the graphic novel project I'm working on for French publisher Scutella éditions: 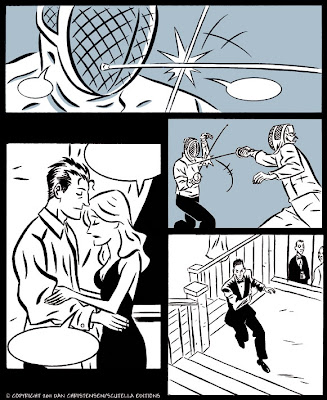 As with my project for Oni Press, I'm about a third of the way done with this book. I'm trying to finish as quickly as possible, but working on two projects at the same time isn't as easy as I thought it would be. The book is scheduled for a late 2012 release, so I seriously need to figure out a way to make better use of my time (like giving up sleep or something) if I want to meet my deadline. 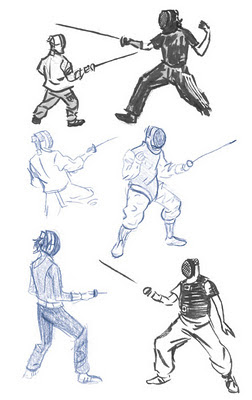 Here are a few teaser panels and sketches from the graphic novel project I’m currently working on with Jamie S. Rich for Oni Press.

As of this writing, I’m over a third of the way done, and things are coming along pretty well. The story is amazing, and a real pleasure to draw. I just wish I was faster so you could see it sooner...

Check out Jamie’s blog right here for more info on the project (and to see some more drawings, too)!
Posted by Dan C at 10:59 PM 2 comments:

Marvel Universe Too- What If?

As any of the artists who participated in DC Fifty-Too! (see previous post) can probably tell you, the project was so much fun that we couldn’t just stop after the first cover. Jon Morris invited us all to create another one—this time, of a Marvel comic book—that we would like to draw, if Marvel ever gave us the chance.

Iron Fist has been one of my favorite characters since I was a little kid, so he was my first pick when Jon told me about Marvel Universe Too - What If?

I started off by drawing several pages of thumbnail sketches, and it quickly became clear to me that I was shooting for an old-fashioned, 70’s-style, action-packed cover. Once I figured that out, I started thinking about which villains I wanted Iron Fist to fight. Each one had to be tough enough to give him a run for his money in a one-on-one confrontation, and I wanted there to be a whole bunch of them on the cover--at least four. I finally settled on Mr. Hyde, The Cobra, Sabretooth and the Constrictor.

At first, I was going to have Iron Fist use some kind of obscure Shaolin Kung Fu technique against the bad guys, but in remembrance of those long-gone days when I actually had time to play video games, I decided to have Iron Fist use one of those Sagat-style “uppercut + jumping knee to the face” combos I’d try to master in Street Fighter II until my thumbs hurt.

For some reason, though, I had a really hard time with the colors of this piece; I just couldn't figure out what I wanted to do with it. After several failed attempts at trying to use warmer, brighter 70’s-style colors, I finally went back to a more muted palette, which is what I’m more comfortable with.

Also, in honor of the Cornered blog, I threw in an Iron Fist corner just for fun. I was planning on using the original Iron Fist drawing I had done a few years ago for my Superhero Alphabet, but when I looked at the drawing again, I saw there were a couple of things that really bugged me. So I fixed them and gave Iron Fist some bandaged hands (like Matt Fraction, Ed Brubaker and David Aja did in the excellent Immortal Iron Fist reboot back in 2009) and some baggy kung fu pants.

Like DC Fifty-Too!, this was a great project to work on. Thanks to Jon for inviting me to participate.

I gotta get back to work, but I’ll post some updates and teaser panels from my graphic novel projects for Oni Press and Scutella Editions in a couple of days.
Posted by Dan C at 8:50 AM 2 comments: